E3Round UP – The Northern Powerhouse 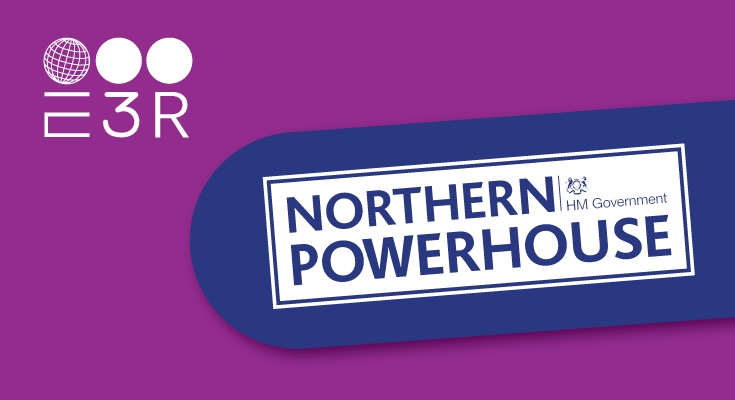 E3Round UP – The Northern Powerhouse

So what is the Northern Powerhouse, what’s it for and what does it do? E3Round UP thought it would investigate…

With the announcement over the summer regarding HS2’s route, the North’s transport connections are back on the agenda, and in particular the group which is supposed to steer this and ensure the North gets the best deal – The Northern Powerhouse

What is it?
The Northern Powerhouse is a vision to bring together the great cities, towns and rural communities of the North of England and Wales to become a powerhouse for the economy. This will be achieved through modern transport links, a revolutionary new style of governance and increased investment.

Objective: The Northern Powerhouse’s objective is to achieve a sustained increase in productivity and ultimately boost economic growth across the whole of the North.

Key areas which cause barriers to productivity and growth in the North include:
Connectivity: In northern cities workers commute shorter distances; Almost half a million commuters travelled over 30km to work in London in 2011, less than half that number travel the same distance to work across all six major city regions in the North. This limited reach of northern cities’ labour markets means that workers choose from fewer employers, and vice versa, holding back wages and productivity.
Skills: The proportion of graduates in the North is 4.4 percentage points below the UK average, and the proportion of people with no qualifications is 1.2 percentage points above the UK average
Enterprise and Innovation: The North has 34% fewer patents per head than the UK average and 17% fewer businesses per head.
Trade and Investment: The number of foreign direct investment (FDI) projects per head in the North is 66% lower than in London and the South East.

Build on the North’s strengths in science ensuring the North continues to be an excellent location to complete ground breaking research
£235 million to the Sir Henry Royce Materials Research Institute based in Manchester with centres in Leeds, Liverpool and Sheffield
£38 million for the National Graphene Institute in Manchester
£20 million to the National Ageing and Innovation Centre

Is it working?
Since George Osborne launched the Northern Powerhouse vision three years ago there have been three Northern Powerhouse ministers – the most recent Jake Berry was appointed to the role in mid-June. Berry believes it is moving into the second phase, whilst many believe it still remains a concept, rather than anything physical at the moment. Three civic leaders have been elected as part of devolution deals; Steve Rotheram Mayor of Liverpool, Ben Houchen Mayor of Tees Valley and Andy Burnham Mayor of Greater Manchester where fiscal power has been devolved and the city was given control of its health budget in February.

Manchester Centric
Some believe Manchester has received the lion’s share of funding and there are objections to Manchester being the central focus of the Northern Powerhouse as the government is recreating a smaller-scale version of the current imbalance between the North and London.

What might be right for Manchester is definitely not right for Yorkshire. Some Yorkshire towns and cities, including Hull, York and Sheffield, are often overlooked in favour of Leeds. Manchester and Liverpool and Sunderland and Newcastle are rivals beyond the football pitch, so bringing together these different business communities and people with distinct regional identities could prove challenging as the distance is physical, as well as cultural.

But if the North is to keep its young talent and higher skill set, they need to be able to commute quickly from the towns like Bolton, Castleford and Carlisle to Manchester, Liverpool, Leeds, and Newcastle. Currently it takes one hour 37 minutes to travel 60 miles from Carlisle near the west coast to Newcastle near the east on an old train line. Journey times across the North are twice those of the South and it takes longer to get from Liverpool to Hull by train than London to Paris, which is twice as far.

Transport
For that reason, transport must dominate the Northern Powerhouse’s agenda improving the North’s transport links between its major cities and towns. Taking all this into account, the Northern Powerhouse has had a major setback this summer as the government pulled back from plans to electrify rail lines, possibly including the Transpennine line between Manchester and Leeds. The Department for Transport has also decided not to add two much needed platforms at Piccadilly Station. George Osborne promised a new fast line from Liverpool to Newcastle, but this ‘Crossrail of the North’ has yet to receive funding. All whilst London gets a second multimillion pound rail link. So although HS2 has been welcomed, it still does very little to link up the North or improve current services and will not be tangible until 2026.

New Government
Since Theresa May became the new Prime Minister some believe the Tories have put the Northern Powerhouse into reverse with the focus on the North being downgraded into a nationwide agenda for boosting productivity outside the South-East. The government denies this and has pledged to “help the great cities and towns of the North pool their strengths and take on the world”.

Conclusion
For many businesses the Northern Powerhouse is seen as a great opportunity, but three years on many feel it has stalled. It needs a jump-start – but rather than waiting for government or the new minister to lead – the new northern mayors, together with council leaders, civil society and business have seized the momentum and are getting on with the job themselves. In the autumn an independent northern energy strategy will be published and there will also be a commission working on education and skills. Ideally the government should grant the North powers to drive innovation, investment and transport infrastructure decisions itself, but that is unlikely to happen. So instead, although there isn’t always obvious synergy between some of the cities and towns, it is vital the North competes together as one major economy, rather than competing against one another.

This article has been taken from E3Round UP Autumn Edition – to view the full magazine please click here.