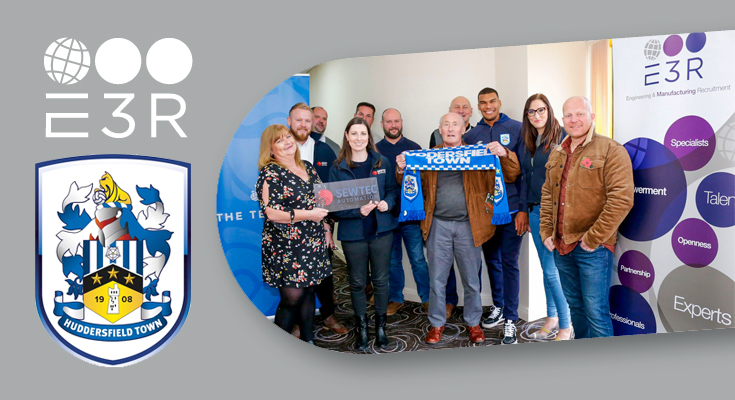 A lifelong Huddersfield Town supporter fulfilled his dream to watch his team one last time this Saturday for the local derby, thanks to two local businesses – E3 Recruitment and Sewtec.

Keith Mountford aged 72 from Ossett has attended home games all his life with his son Andrew Mountford and son in law Scott Iggleden up until he was diagnosed with terminal cancer in November last year.

Keith’s son in law Scott works for Sewtec Automation, a specialist precision engineering company based in Dewsbury. The company held a Family Charity Event to raise money for local charity Star Bereavement Support Service which provides bereavement support to children and young people in Wakefield and Wakefield Community Awareness Programme which provides support for the homeless. Engineering and Manufacturing recruitment specialist E3 Recruitment (E3R) based in Huddersfield works with Sewtec and kindly donated four directors box tickets outside for the Barnsley game on Saturday to be included in the raffle.

Scott won the tickets, and straight away he offered them to his father in law Keith and brother in law Andrew as they are big Town supporters, and Scott is actually a Tottenham Hotspur fan. He also planned to attend with colleague Darren Thornton.

But due to the cold and wet weather forecast, Keith had to cancel as he was unable to sit in the cold due to his health. That’s when his daughter in law Faye Roxbrough, who works for FR Lifting Services in Ossett, got in touch with E3R to see if there was anything that could be done.

E3R Director Andrew Joseph commented: “When we heard about the circumstances, we really wanted to make this day special for Keith and his family. We upgraded the four directors box tickets outside to an indoor box for ten, which included food and a meet and greet with Colin Quaner and Christopher Schindler who then went on to score the winning goal! We’d like to thank Huddersfield Town Commercial Team for helping make this day happen and we are delighted Keith and his family made a memory which will stay with them forever.”

Scott Iggleden who won the tickets commented: “E3 Recruitment went above and beyond to help make this day special for Keith and really went above expectations. I had a great day, along with all the rest of the guests which included other colleagues from Sewtec. Keith thoroughly enjoyed himself and even former Town manager Peter Jackson came and met him. The end 2-1 result to Town was the icing on the cake. I would like to thank Sewtec, Faye and E3 Recruitment for making it more special for us all and Keith. A special memory that we will all remember”.

Mark Atkins, Director of Business Support at Sewtec commented: “A massive thank you to E3 Recruitment and Huddersfield Town for hosting Sewtec Automation and family members at Saturday’s local derby. A great day out by all including watching Town’s first win of the season and meeting the players”.