UK Automotive industry on the up still…. 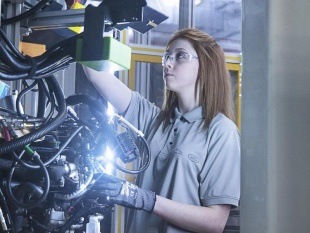 UK Automotive industry on the up still….

THE UK car industry reverted to its recognised growth pattern in August with production up more than 40%, latest figures have shown.
Figures from the Society of Motor Manufacturers and Traders show manufacturing output increased 40.6% in August to 99,910 (2014: 71,067). The figure takes year-to-date production volumes past one million to 1,011,127 (2014: 994,951); a gain of 1.6%.
More encouraging was that the number of cars produced for export rose, up 38.8% to 73,219 (2014: 52,739). However, the overall number of vehicles produced for export this year – 773,689 – still represents a 1% fall on the situation 12 months ago.
Mike Hawes, SMMT Chief Executive, said: “The quieter summer months are traditionally subject to fluctuation as production is paused for essential upgrades, and August’s strong growth wasn’t unexpected given the 22.1% fall in the same month last year when the 2014 holiday period fell.
“The rise also follows a flatter July in line with this year’s earlier scheduled shutdown. That said, with an overall increase of 1.6% so far in 2015 and the strongest year-to-date performance since 2008, the industry is in a good position.”
John Leech, head of automotive at KPMG UK, said the figures suggested the UK car industry had confounded summer traditions, with manufacturing figures passing the one million mark in August for the first time since 2008 and a 40.6% rise over the same month last year.
“Although this could be influenced by an earlier summer shutdown, the strong August figures are backed up by the fact year to date output is up by 1.6%, with a particularly strong increase within the home market at 11.1%,” he said.
“The resilience of UK car manufacturing figures is apparent despite ongoing volatility in the global markets, and the high-profile challenges facing Volkswagen this week. This resilience has benefited from the £6bn investment by vehicle manufacturers in developing long-term strategies to support new models and facilities in the UK. The increased capacity will service the continuing strength of UK market, as well as the export market across continental Europe.”
He said recent announcements such as the £200m pledged by Honda to produce the next generation Civic in Swindon and Nissan’s commitment to the production of the Q30 and QX30 models, to say nothing of the almost continuous investment by Jaguar Land Rover in its UK facilities, all boded well for the UK industry.
“Long-term, the UK should achieve its ambition of reaching record volumes within the next 24 months,” he added.
The increase in car production also had a beneficial effect on engine production.
Mike Hawes said: “Engine manufacturing enjoyed a boost in August, as factories came back online following the traditional summer shutdown in July. A shift in holiday schedules meant the industry’s seasonal pause in production arrived a month earlier than usual, resulting in bigger fluctuations in output.
“However, with more than 1.5m engines produced in the year-to-date, and significant investment in new plants set to be realised this autumn, the prospects for future month-on-month growth look promising.”
Total engine manufacture in August was up 15.8% on the same month last year at 112,777 units (2014: 97,406). More have also been produced for export, with volumes up 16.3% on last year.
Nevertheless, year-to-date performance remains subdued with total volumes down 3.4% at 1,562,503 (2014: 1,617,265).