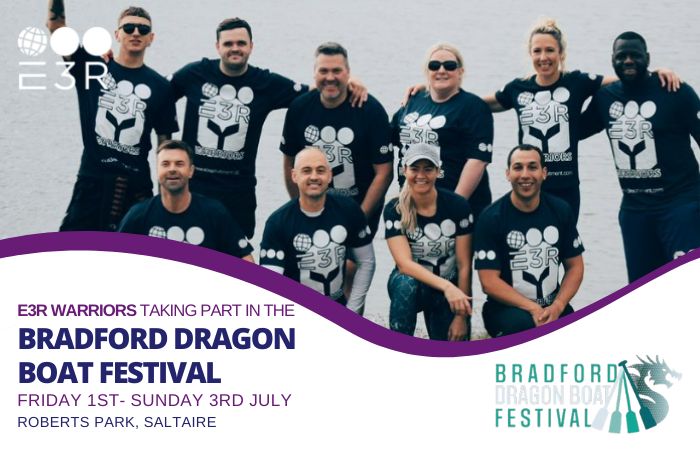 On Saturday 2nd July E3R Warriors will be competing in the Bradford Dragon Boat Festival which takes place at Roberts Park, Saltaire.

The E3R Warriors, who will be cheered on by their families and friends, will be competing against 40 teams including manufacturers Denson Marso, Gesipa, Carnaud Metalbox and BorgWarner.

The Saturday of the weekend festival is The Lord Mayor’s Championship which aims to raise over £30,000 for the Lords Mayors Appeal which supports Marie Curie Hospice Bradford, the UK’s leading end-of-life charity Bradford Community Kitchen, which feeds homeless and vulnerable people in Bradford.

The Bradford Dragon Boat Festival is already the largest event of its kind in the UK today.  Designed as a free-to-spectate festival, the event is organised by the community of Bradford for the community of Bradford.  Along with the dragon boat racing, the festival also will include ethnic and international food vendors each serving their diverse range of wonderful foods, bar outlets, market stalls and a whole host of traders.  It’s set to be a fun-filled day starting at 9:30 am and running until 5 pm with 15,000 people attending with live bands, food stalls, face paint artists and various other entertainers throughout the day.

Teams will race for 200 meters with the start just beyond the cricket pavilion and the finish in front of the crowds in Roberts Park.  Each team will have a minimum of three timed races where their single fastest time only will count for Grand Final qualification.  What this means is, even if two of our races are both disasters, one great time is still all we need to be in with a good chance of going through to the Grand Final race!

It’s a great activity for team building and camaraderie, as teamwork is vital if a fast time is going to be achieved. ‘On-the-water training will be given by the instructors who will help with technique.  Fitness is not a key factor – technique however is.  So, it does not matter if teams are made up of just 12 paddlers or 16, because it’s a team sprint where teamwork and timing are everything.

We will be aiming to compete in the last race of the day … the Grand Final.  This will be a race where the top three teams from across all the qualifying heats will race once more in the most competitive race of the day.  The Grand Final will be a 3-boat race to the finish where first across will be declared: Lord Mayor’s Dragon Boat Champions of Bradford 2022.

Bradford Manufacturing Weeks Getting To Know You Event

Over £3,300 raised and 500 miles completed by E3R and Yorkshires Manufacturing leaders for Men’s Mental Health

Get up to Speed with STEM: Helping to close the skills gap