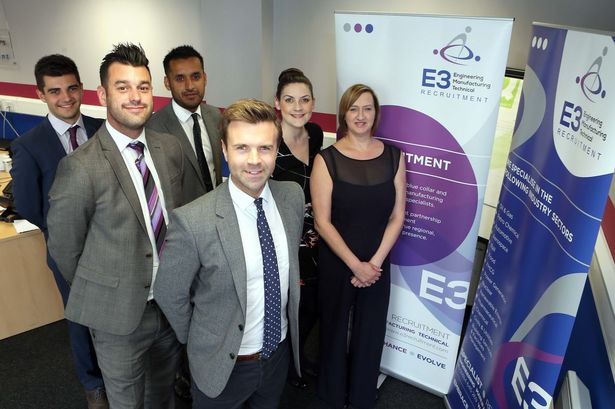 A Huddersfield-based recruitment agency, which specialises in the engineering, manufacturing and technical business sectors, is gearing up for further expansion following a hugely successful first 12 months of trading in which turnover exceeded £1m.

E3 Recruitment was set up in June last year to help some of the region’s – and the UK’s – most successful companies identify and attract high quality personnel.

The UK jobs market is becoming highly competitive as companies look to rebuild their workforces, at all levels – and with a mix of skill-sets – in response to business growth fuelled by an ever-improving economic outlook.

From E3’s headquarters at Heritage Exchange in Lindley, directors and partners Andrew Pilling, Tracie Norton and James Soden, have created a business model based around an understanding that a successful recruitment approach is a fundamental part of every successful business.

‘We live in an age driven by technology,’ said Andrew. ‘But good people are still the cornerstone of great businesses. Together, the three partners here have over 60 years’ collective experience in the specialist recruitment marketplace and we have a philosophy which is based on understanding and partnership.

“We need to understand what our clients do and who they need to recruit to help them satisfy their own customer’s requirements. We also need to be able to promote the client’s business to candidates so that we draw up shortlists of only the right people for the job. That all requires investment and integrity.”

The E3 team now stands at six – with the directors having been joined recently by Breanne Rodgers, Jordan Kellett and Rizwaan Haider – with a further two consultants now being sought as part of E3’s on-going growth plans which envisage additional offices being opened in South Yorkshire and the Midlands.

‘Collectively, we can challenge any other business in our specialist sectors,’ said Tracie.

“The three directors are like-minded individuals who each possess excellent specific sector expertise, who each have a first-rate reputation within their specialist sectors and who have a network of contacts – the lifeblood of every successful recruiter – which we believe to be as good as any of our own competitors.”

E3’s clients range from blue-chip businesses to small and medium-sized enterprises with a focus in and around Yorkshire.

“We are building the E3 business so quickly because of our track record.” said Tracie.

“We receive a lot of referrals from clients through our reputation for looking after not only their needs but also those of the candidate.

“It is a tripartite relationship, really, between us, the client and the candidate.”

Tracie originates from Cheshire, but has lived now in Huddersfield for over 20 years with James and Andrew having lived in the town for 14 years following completion of their degrees.

The business was named best business-to-business start-up of 2013 in the prestigious Barclays Bank awards. “That recognised the hard work we put in during the first six or seven months of the business,” said Andrew.

“It was excellent and unexpected recognition so early in our existence, but showed that we have a good team that is passionate and driven in what we do.”

E3 works closely with Huddersfield University to offer placements and some interim project assignments, and the E3 name can now be seen at the John Smith’s Stadium as part of a sponsorship programme in support of Huddersfield Town and Huddersfield Giants.